Hurricane Nate — which is threatening to bring a life-threatening storm surge to the Gulf Coast — made landfall near the mouth of the Mississippi River on the southeastern Louisiana coast Saturday evening.

Maximum flooding of 7 to 11 feet above ground level is expected in parts of southeast Louisiana and along the Mississippi coast, the National Hurricane Center said. A storm surge warning is in effect from Grand Isle, Louisiana, to the Okaloosa/Walton county line in Florida.

The Category 1 hurricane is moving between 22-25 mph, which Landrieu said was unprecedented in his experience.

He urged New Orleans residents and visitors  alike to be responsible in following the city’s mandatory 7 p.m. curfew Saturday night, noting the need for safety while reassuring it’s not likely police will arrest or detain anyone in violation.

As Hurricane Nate bears down on the Gulf Coast, New Orleans Mayor Mitch Landrieu has ordered…

The NHC said Nate will pass near or over the Mississippi River during the next few hours before making landfall along the coasts of southern Louisiana or Mississippi Saturday night.

After landfall, the center of Nate is expected to pass over portions of Mississippi, Alabama and Tennessee through Sunday night. 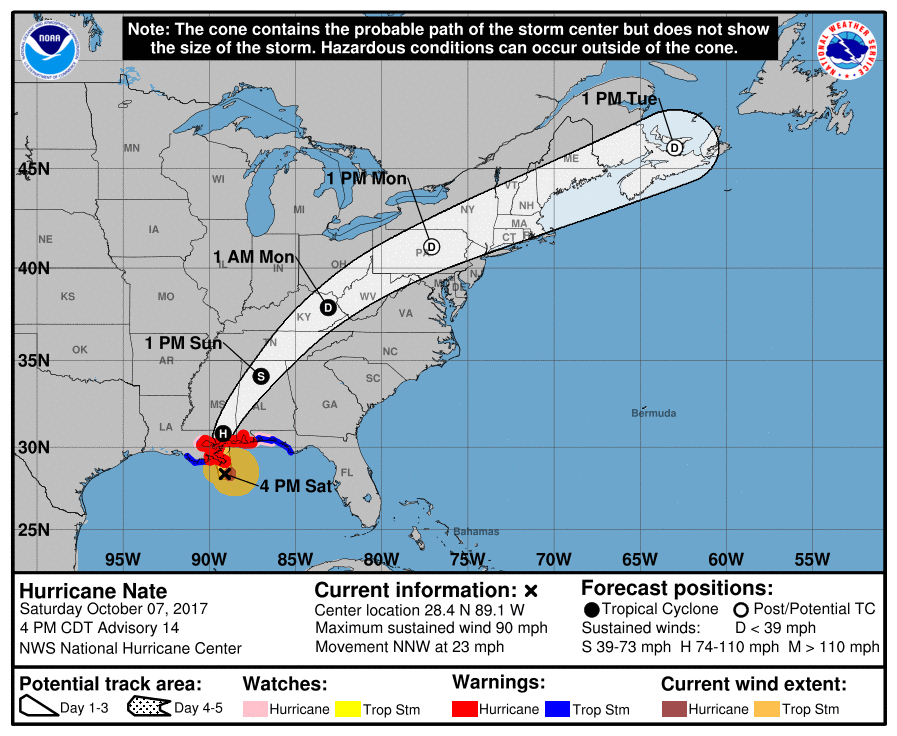 Hurricane Nate is just hours away from a Gulf Coast strike.

Nate will make landfall along the northern Gulf Coast tonight or early Sunday.

Life-threatening storm surge is expected along the coast tonight from southeast Louisiana to the western Florida Panhandle.

Nate will produce a swath of heavy rain from the Gulf Coast to the Appalachians and possibly parts of the Northeast.

Strong winds capable of tree damage and power outages will penetrate inland over the Southeast through Sunday.